I recently stumbled across a site called NoStringsAttached. It’s a dating website that claims to connect people looking to meet someone to hook up with. For those unfamiliar with the whole No Strings Attached concept, I’ll give you an idea of what it means, how it works, and why everyone loves it. For starters, it’s a term used to describe a very casual yet intimate relationship.

Basically, it refers to the process of meeting someone, hooking up with them, and moving on with each of your lives from there on out. Most people that like to partake in this type of action are those whom are already in an existing relationship. Others that might want to do so are those simply looking to have sex but only once. Basically, it’s all about being discreet, having sex, and moving on from there.

As for NoStringsAttached.com, this is a site that’s dedicated to connecting people looking to have an NSA relationship. I guess you could call it the official NSA Finder, but the real question is whether or not it actually works! 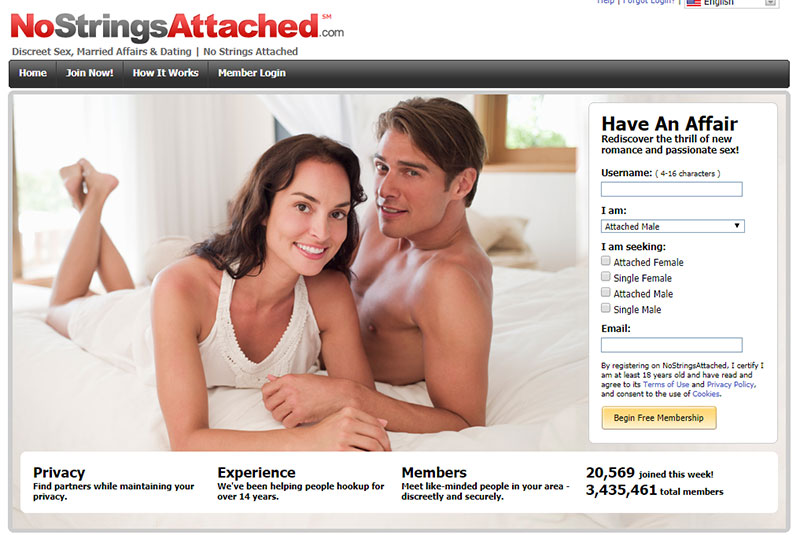 If you’re smart, you’re going to work one really good dating site until it works for you versus jumping all over the place. However, I find it absolutely imperative that I share my experiences with users regardless of whether or not I use one specific site daily. If I used a dating service and it sucked or was awesome, I’m now going out of my way to share the experience with users.

The first thing you need to know about NSA.com is that the site does seem kind of exciting when you first start to use it. There’s nothing better than coming across a site thinking that it’s going to be the best thing since sliced bread. The problem is that this site doesn’t really hold up to its promises.

You’ll notice that the site claims to be able to connect users for discreet sex, affair dating, and other non-committal types of relationships. While that sounds fantastic, it’s not the reality of it all. While the company most definitely puts forth effort to protect the privacy and status of their members, they aren’t exactly housing as many “discreet” profiles as they claim to.

Well, at least based on my personal research, I didn’t find that there were as many married women looking for sex on the site as they claim. Maybe I didn’t put enough time and effort into my profile. I really can’t say whether I did or did not. All I know is that the low quality of horny married women was a bit of a let down. The problem was the most of the women that are on the site are not tied down with anyone. Instead, they are looking for something casual that’s more long term but definitely not a no strings attached type relationship. See, I’m literally looking for someone I can bang once and be done with them.

One other thing that I noticed when using this site was that fake profiles were a part of the network. I did find a few fake profiles that I had to weed during my searches. I cannot tell you how incredibly annoying it is to run into fakes. This is pretty typical of most sites given that people try and steal your money on some, but I just didn’t have a stellar experience with it.

Honestly, this site does work, but it’s not nearly as effective as Instabang. Sure, the sites been online for close to 20 years, but none of that stuff matters to me unless I’m sealing the deal and getting laid. That’s all it really boils down to for me. I can find a no strings attached one-nighter on IB and I do regularly. You know what they say, if it’s not broken, then don’t fix it!

Before joining NoStringsAttached, be sure to read my IB experience on this page here.