Ever wanted to have a few bang buddies to hook up with on a regular basis? I’m sure you do because I do too. Many guys, including myself, have found themselves in the unfortunate situation of being put in the friend zone. You know the situation. You fall in love with her and she thinks of you more like a buddy. This can hurt and could result in you losing your dignity, being taken advantage of, or at the very least being left in the friend zone indefinitely. She is either not attracted to you at all, or you made a mistake that put you in the friend zone. Either way, there is a way to recover. Follow these simple suggestions and you could possibly make the leap from friend to bang buddy. 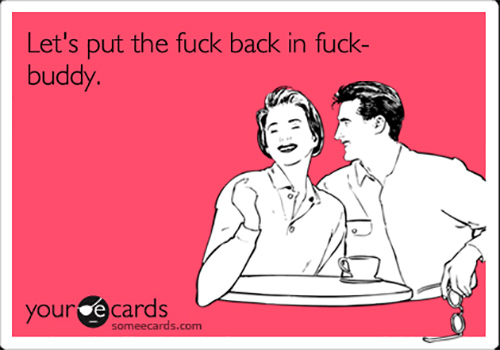 Tips For Getting A Girl To Become Your Bang Buddy

Whether you’re a veteran dater or new to the scene, read this and find out how to go from friends to bang buddies with very little effort.

Remain Aloof – One thing that you should avoid at all costs is losing your dignity and appearing too desperate. This could not only ruin your chances of ever being her lover, it could ruin your friendship as well. It is important to be cool, or at least appear cool with the situation and don’t try to push her into a relationship that she does not want.

Become A Better Version Of You – This does NOT mean that you should become who she wants you to be. All humans should make a constant effort to better themselves. Think about the characteristics that you aren’t very proud of and make a change for the better. She might start to realize that she misjudged you and decide that you are a potential lover after all.

Stop Trying To Seduce Her – One of the worst things you can do is continue pushing yourself on her. This could make her uncomfortable around you and even cause frustration. This is another thing that can ruin your chances of getting out of the friend zone and ruin your friendship as well. She doesn’t want to feel like she’s being forced into anything.

Don’t Spend Time Exclusively – Avoid hanging out with her constantly. Go out and spend time with other people. You definitely need to be dating many people online at this time. If you act like a little puppy dog following her around everywhere she goes, that is exactly how she’s going to think of you. Be your own person, independent of her, if you ever hope to convince her of what she’s missing.

Calculated Flirting – You should not try to seduce her, but you don’t have to cut out flirting altogether either. Make your flirting as subtle as possible and never let it reach the point where it’s obvious. Get close to her from time to time or touch her arm or leg when you’re talking. She could eventually come around if you don’t push the issue.

If All Else Fails… If you have tried everything mentioned above and you are still firmly stuck in the friend zone, give up. Yes, you read that right. Give up on trying to get her to come around and just be her friend, even if it hurts. If you are meant to be together, she will come around. If not, move on and find someone else and don’t make her feel like you were only her friend because you wanted to be her lover.

Look, if you can’t put these simple tips to work for youself, then I really don’t know what to say to you. I’ve successfully been banging friends for years and it’s something that I thoroughly enjoy. You can be in the same position if you play your cards right!